Here are the names of the Call Of Duty 5 – World at War death cards, where to find them and what they do. 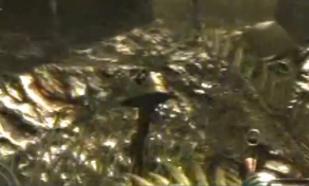 Death cards can be found on lots of the single player missions when you play world at war. There are 13 in total and they unlock cheats that you can use in co-op mode. Some of the cards make it easier, some of them make it harder! Also can be used in single player after you have played the game all the way through on a particular difficulty, you can go back and play it again on the same difficulty with cheats enabled (not multiplayer). Death cards are strapped to a soldiers helmet and you will see them propped up on a stick.

Mission: Semper Fi
Location: When you start the mission go to the right into the second hut.

What it does: Explode enemies when you shoot them directly in the head.

Mission: Little Resistance
Location: At a point in this mission you will be attacking a large bunker. You can use the tunnel to sneak closer, kill all the enemies through it and when you pop out the other side go right and it is in the long grass. Look closely!

Effect: Enemy soldiers will need more shots to kill them and generally take less damage from you.

Mission: Hard Landing
Location: Get most of the way through the level and you will enter a broken building. Before you exit the building and before going upstairs you should move further into the dark room to find this death card.

Effect: While you are downed you will have explosive pistol shots!

Mission: Vendetta
Location: Reznov will lead you into a building with a drinks bar and when he opens it up and walks through you should look behind the bar before you go into the next room.

Effect: Enemies will not drop their weapons when they are killed – Knifey knifey fun fun.

Mission: Their Land, Their Blood
Location: You will have to explode four tanks near the end of this mission. The final tank emerges from a barn, once you have defeated it go into the barn and look in one of the stable pens to find the card.

Effect: You will not be able to use firearms at all! Even more knifey knifey fun fun.

Effect: Kill enemies to recharge your health or die! MWHAHAHAHAHAH!

Mission: Relentless
Location: You will go into caves with two different routes through. They both lead to the same room and the end of the mission but half way along the caves they join again and the death card is in this joining section.

Mission: Ring of Steel
Location: As soon as you get in the asylum you need to stay left and continue to a little enclosed bit in the courtyard with the death card inside.

Effect: You will only be able to kill enemies with a direct headshot.

Mission: Eviction
Location: You will go through a kitchen area with loads of soldier in, kill them all and get to the next balcony bit with rpg soldiers etc. Kill them all but before proceeding on you should turn to your right where there is a big flaming hole in the floor. Drop down here and get the card.

Effect: Enemies can now come back from the dead like a god dam zombie.

Mission: Blowtorch and Corkscrew
Location: When you get the satchel charges blow up the first bunker. Then go towars the second one and look for a stone thing with a dead guy hanging off it and the death card.

Effect: If someone on your co-op team dies then just shoot them to revive.

Mission: Breaking Point
Location: Blow up all four mortar pits and before you go up the stairs to the big building, turn around and go in the little hut at the side with boxes in. The card is inside.

Effect: Kill three enemies in five seconds and you will be in rage mode. You’ll be invincible for a short amount of time, but will only have a knife.

Mission: Heart of the Reich
Location: At the very start of the mission look in the tunnel to the left of your starting point for this easy card.

Effect: Paint will splatter instead of blood when you shoot.

Mission: Downfall
Location: Finish the massive fight in the large theater room, and your team will break a door down. Look down the hallways (right side)for a dark room with a card inside.

Effect: The HUD is minimised, friendly fire is all good and you take damage twice as fast – Just like real life 🙂