Loads of people in clans have been asking questions about waterfiends, these creatures are great for crimson charms, which are some of the best summoning charms available. Well to start off – they are level 115 with 128hp and are found in two different place in Runescape, one of them is in the Chaos tunnels where its all multi combat, and its not too easy because of the aggresiveness of the fiends also in that area. The other place is in The Ancient Cavern near the Waterfall, you will need to complete the mini-quest “Barbarian Training” to some degree before you can enter the Whirlpool which leads you down into the Cavern.

YOU CANNOT TAKE SUMMONING FAMILIARS DOWN INTO THE WHIRLPOOL, INSTEAD YOU HAVE TO SUMMON THEM ONCE YOU ARE DOWN THERE.

Waterfiends are one monster in Runescape that does not use a melee attack. Insted they use BOTH mage and range attacks, but their range attack seems to be more accurate and having the same max hit as the mage attack, which is 11. They are generally weak to CRUSH attacks making weapons such as the godswords a great addition for slaying these creatures. There are many methods to use at waterfiends, most prefer to use the Bunyip method because they don’t need to rely on food and/or guthans. But other methods such as ranging and meleeing with guthans are also effective.

This is a Waterfiends range based attack.

The Waterfiends are very easy to get to, with the games necklass teleport to the “Barbarian Assult” minigame which is around 50 – 60 Squares from the whirlpool leading to the cavern.
Here is the location of the Whirlpool, notice the Barbarian outpost is just north of it:

Location of the Whirlpool leading to waterfiends.

When you have teleported to Barbarian outpost using the Games Necklace, then run directly south untill you get here:

Jumping into the waterfiend whirlpool

From here Jump into the Whirlpool (the animation is pretty good for this! :P) you will end up here: 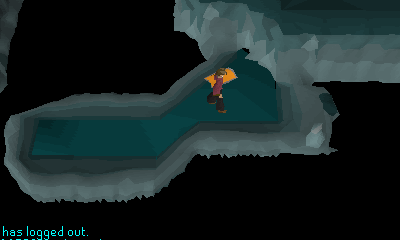 Inside the whirlpool waterfiend cavern.

From here you go down the steps on the far east of the platform you are on, you now are face with two choices, if you are ranging you should use the the first spot which normally will have somebody using it, for meleeing you shold use the second spot as there are more waterfiends and less people. 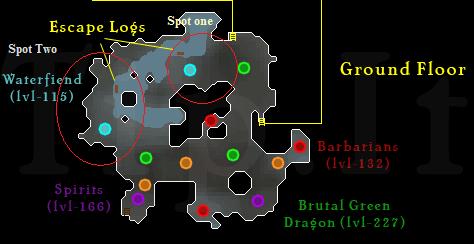 When you are finished you CAN use home teleport because they should be non-aggressive by then, if not then you could use the logs in the river which takes you near the waterfall which is a safe place you can use the hometeleport.

Method one is normally the most popular, it involes using a bunyip as the healing source, a bunyip requires 68 summoning to use and will heal you 2hp every 15 seconds this is good enough to provide the hp that you lose to the waterfiends.
An example inventory is shown below, the invent used can be adapted to get the best possible loot to suit the individual player. 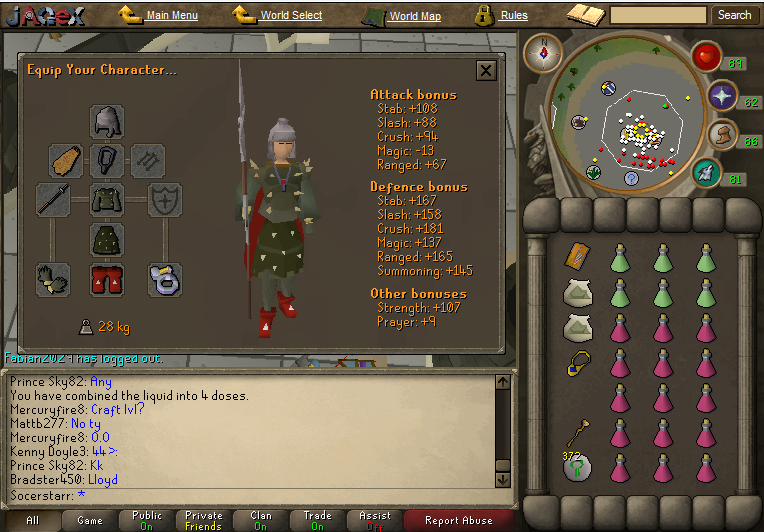 If you have high enough summoning, you can use 2 bunyips a trip – you need 75+ summoning to do this, if you dont you could always take out a combat potion for a summoning potion so you could summon two.

When you tele to the barbarian outpost go into the assult building and bank the games necklace so you have 2 free spaces, then go into the whirlpool and run to spot 2 where you can drop your anti fire shield and summon one bunyip, this enables you to have 3 free spaces once you have got to your spot, this means you can loot all crimson charms and a few extras such as alchables (explained in FAQ’s what the ‘notable’ drops are.)

Protect from range so you only take damage from the mage attacks from the waterfiends, using the mage defence armour means that you don’t get hit much so the bunyip will heal more hp than you will lose.

Other weapons you could use instead of the zammy spear are: godswords (sara works every well here because its special), sara sword (pretty much the same speed as the spear) Veracs Flail (only use this as a last resort, this averages 40 crimson charms per bunyip compared to 60 – 70 charms with the zammy spear.)

Stay untill your bunyips have run out, this makes it less boring and easily enjoyable, a bunyip lasts for 44 minutes. Generally you will average 120 charms a trip which comes out to 30 – 50K summoning exp.

The cost of this is strangly low. If you use prayer potions instead of super restores (suggested because super restores are more expensive) you should break even each trip, clue scrolls come in handy because they make it so the trip could end in profit as they are level 3.

The second method is less effective method, it relys heavily on guthans and uses less prayer potions as you dont need to pray when you above half hp. Once you get lower then half you then pray RANGE untill you are about 90% of your HP. For this method you use spot one, mainly because if you become desperate for HP there is a barbarian there which uses melee only so you can pray melee and heal freely on him.

Here is the suggested invent for method two: 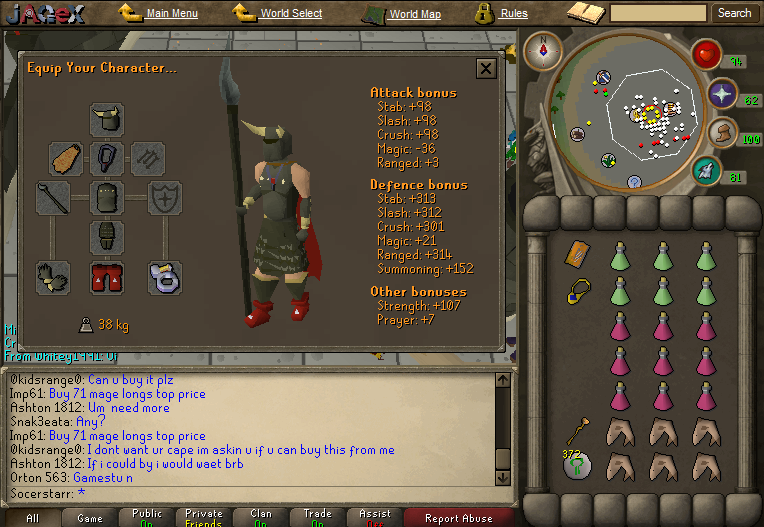 The inventory includes food incase you become desperate for hp and there is no skeleton to heal on, although there are less prayer pots. When you become more experienced with this method you could get around 160 charms per trip, but its slow work because your relying on guthans. lots of people hate this method because of that factor and the red bared moments. So generally if you dont trust your guthans then don’t bother using this method.

Method three involves ranging, people think that you can’t range these little beasties because they use range and mage attacks, well infact you can. To range them you are going to need to wait untill they become unagressive, this is around 9 – 12 minutes of killing them. The invent for ranging is a mixture of the melee invent mainly because of the waiting for non-aggresiveness.

Here is the suggested invent for method three: 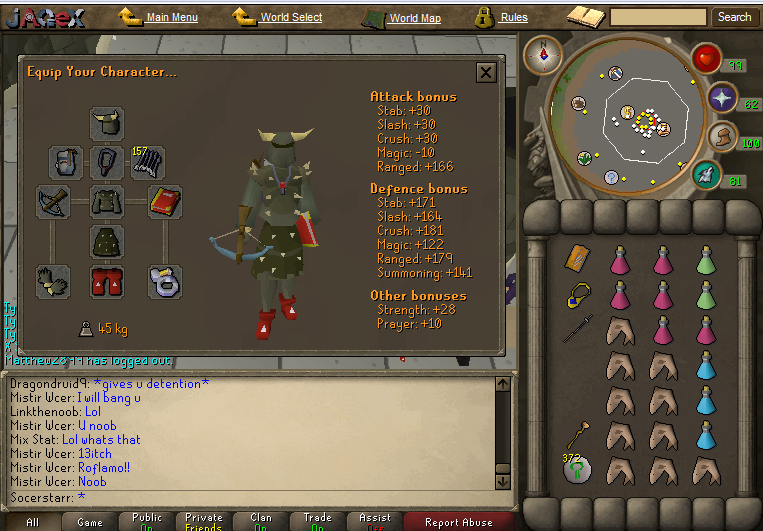 There is only one spot you can only use for this method, this is because you trap them behind a peice of land and range them over the piece of sticking out river.

Here is the ranging spot: 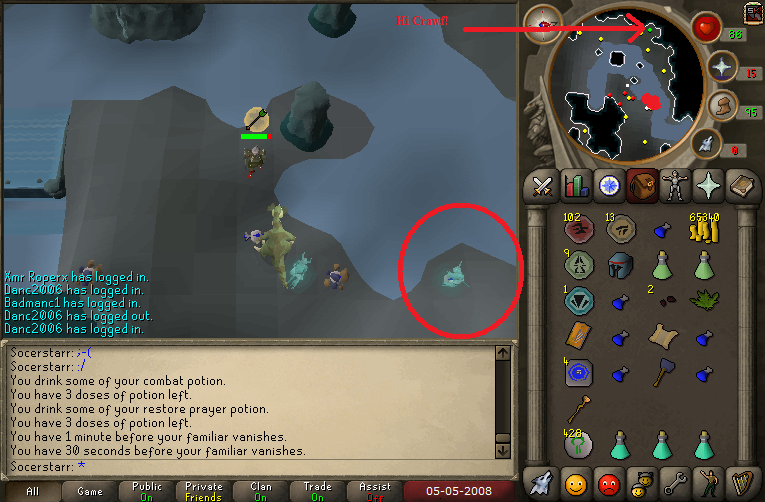 PLEASE TAKE NOTE THAT THE PICTURE ABOVE DOES NOT SHOW RANGING GEAR, IT IS JUST TO SHOW YOU THE SPOT.


In the red circle is where the Waterfiend must be lured to, this means you must attack it when its in the correct place, which is the red splodge on the radar. If the waterfiend is not in the correct place it will attack you with mage and range, this is why you have the extra prayer potions and a melee weapon, so when you mess up you will be able to kill it fast (yes you will mess up at least once a trip :P)

Please take note that this is slowest method that there is, but it is also the cheapest.

Q: Which charms are droped the most?

A: Crimson charms are the most common charms at the waterfiends.

Q:How many charms per hour?

Q: What Slayer level is needed to kill them?

A: You dont need a slayer level to kill these monsters, they are not slayer specific.

Q: Why did you decide to make this guide?

A: Because loads of people in clans ask questions about waterfiends all the time, this guide sums up the methods and saves a lot of time

Q: Whats that helm in the melee without guthans picture?

A: The Helm is the Dwarven helmet – it gives +6 crush bonus.