1) if you die you don’t get a grave, so don’t take anything you dont want to risk.
2) Corp beast is incredibly strong and can hit 55+ at a consistent rate, so mage prayer is a must.
3) Mage prayer doesnt totally negate all damage dealt, just as when pking you dont negate all damage when praying against a fellow player.
4) The Corp Beast does ignore most of your armour Bonuses so therefore the argument of “put on karils instead of Black d hide” is in my opinion irrelevant.
5) The corp has 20,000 hp so killing it will take a while
6) Do not step under the corp beast at any time as it will crush you, hitting upto 500 damage.
7) NO BROAD BOLTS
8) NO BROAD BOLTS
9) you guessed it, NO BROAD BOLTS
10) Don’t take a summon, it will only get eaten and heal the corp

the corp beast is the strongest creature currently on runescape. The corp will attack with all 3 combat styles however using mage prayer is best as it hits hardest with its mage attack.
The risks are great with this beast, however the rewards are great. Not only does it drop the 4 sigils, almost all of its drops are worth having as they are all worth something, e.g. 2000 cannonballs.
To fight the corp effectively you need either 6+ lvl 130+ or 10+ lvl 120+.

Corporeal Beast is a boss that requires a high combat level and good gear to kill efficiently. However, a very underestimated aspect in corping is “skill”. The number of kills a trip and kills an hour you do is highly dependent on how you how you handle your supplies in the corp lair. This includes but isn’t limited to: when you eat, what you pray, how you react to the core, how good the stunner is, and where you stand. Just because you meet the combat requirements and have all the supplies does not mean you can corp. This guide will tell you how to corp efficiently and do a large number of kills per trip ranging from 20-25 kills a trip (I’ve done 28 as a peak but considering the majority of corpers get around 12 ATM, 20-25 is good enough to distinguish you from the rest).

Must of completed SUMMERS END (quest)

85 attack and strength (if meleeing)

These stats are only a guideline so dont panic if you have lower stats, you can still fight the corp beast. Of course the more people there are the lower stats are required to kill it.] 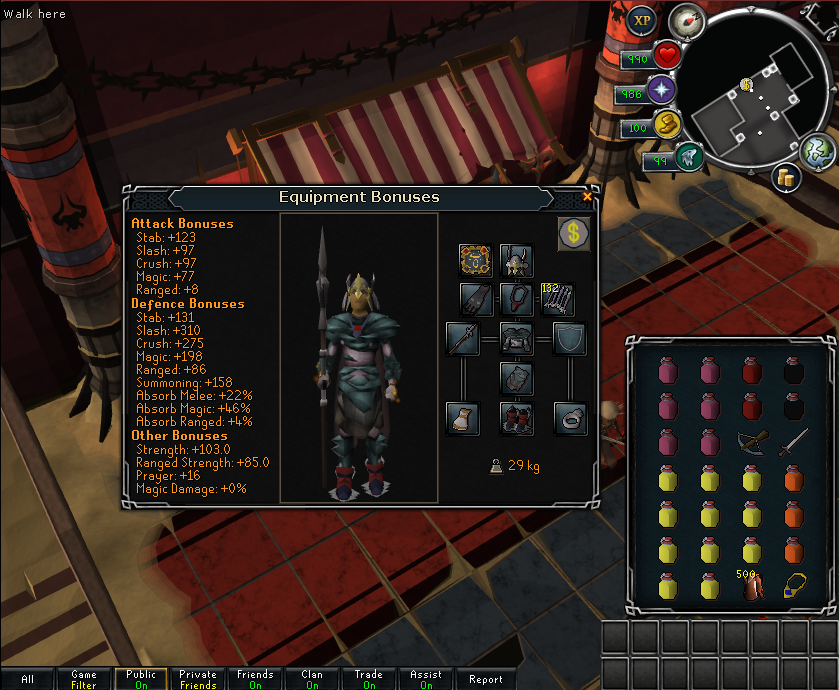 Note: Gear that can substitute the above:
Fighter hat
D stone/Diamond (i)/Berserker/ Berserker (i) (if you’re under 100 MA rank bring berserker, If you don’t want to risk 5m extra corping here’s you inspiration to start doing ma). If you bring ring of life you will be KICKED from most 5 man teams. Simple as.
Fire cape (Bring games necklace if you’re bringing it) / Ardougne Cloak 4
—————————————–
Explanation.
Why the rune crossbow? It has always been debated that the rcb “kos the core more than mith”, where it doesn’t affect ranged strength. I honestly don’t care which you bring because the difference is probably microscopic when you’re in karils and your range bonus is already high and are hitting on a low def lvl 75 core.

If you have the bank value to increase your weapon then do so, upgrading the Darklight to a Bando’s Godsword is extremely helpful.

This setup is for people with low cash value, and people who have not got 90+ herblore. 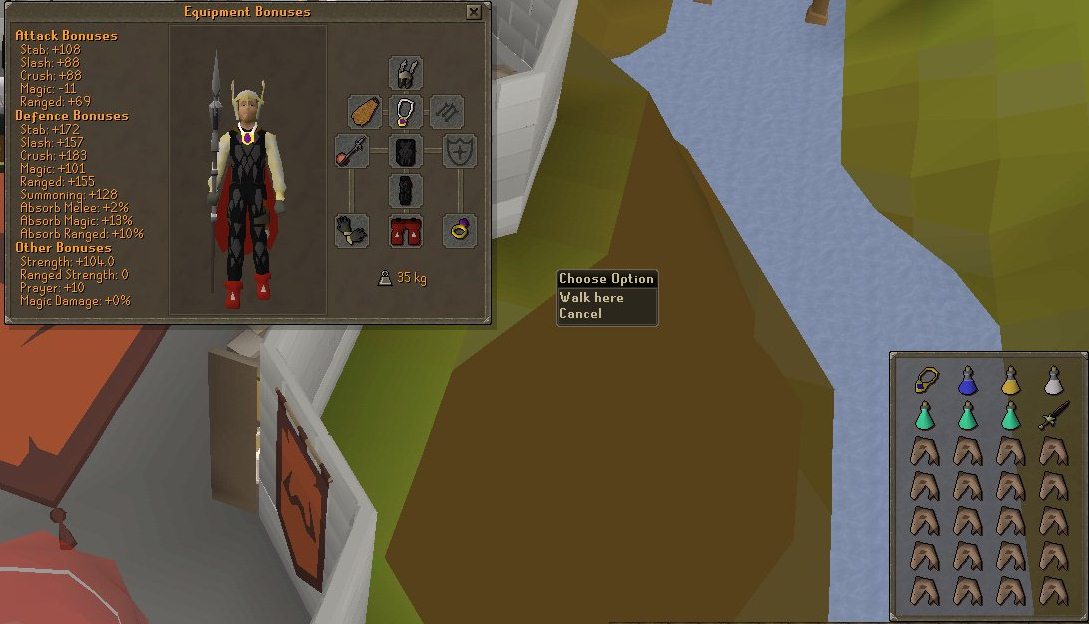 This setup is for people with low cash value, but 90+ Herblore. 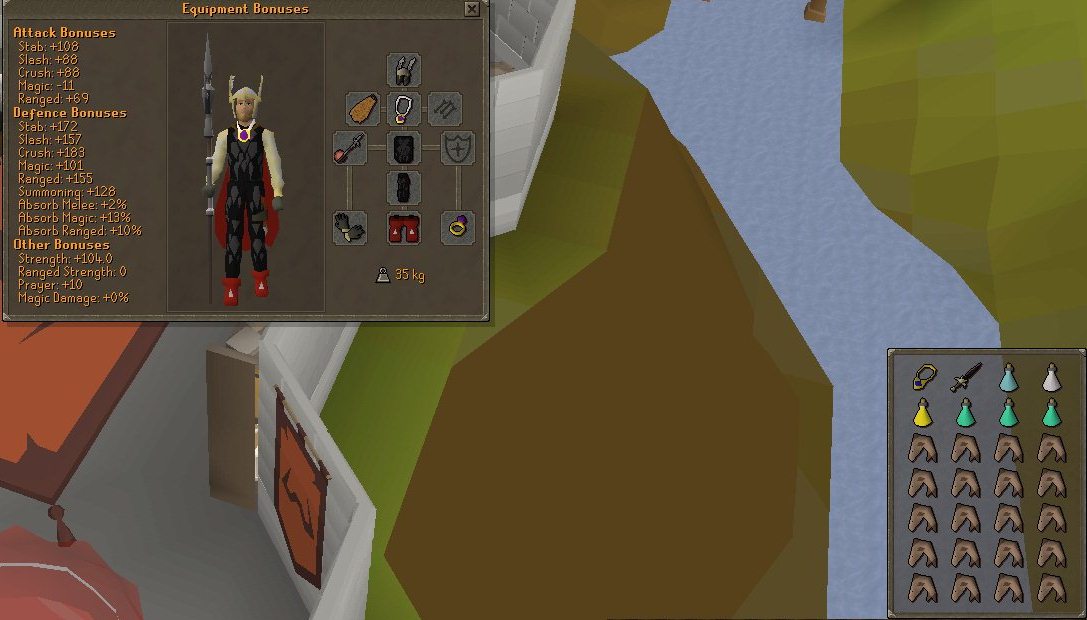 This setup is for people who have a slightly higher cash pile, as well as 96+ Herblore

Since recent updates have reintroduced the Wilderness, you no longer are required to run through past Bounty Hunter to get there. As a requirement you need to use a Games Necklace which will teleport you directly into the lair’s entrance. From there follow the screenshots on what to do.

When you teleport in, run East towards the first entrance as shown on the minimap below

Corp Beast Tele In and Run Towards First Entrance

Enter the entrance, then continue due east to the second entrance BUT DO NOT ENTER!!!

You will now be at the Entrance to Corporal Beast’s Lair, stand around the entrance shown below and do not enter until instructed. 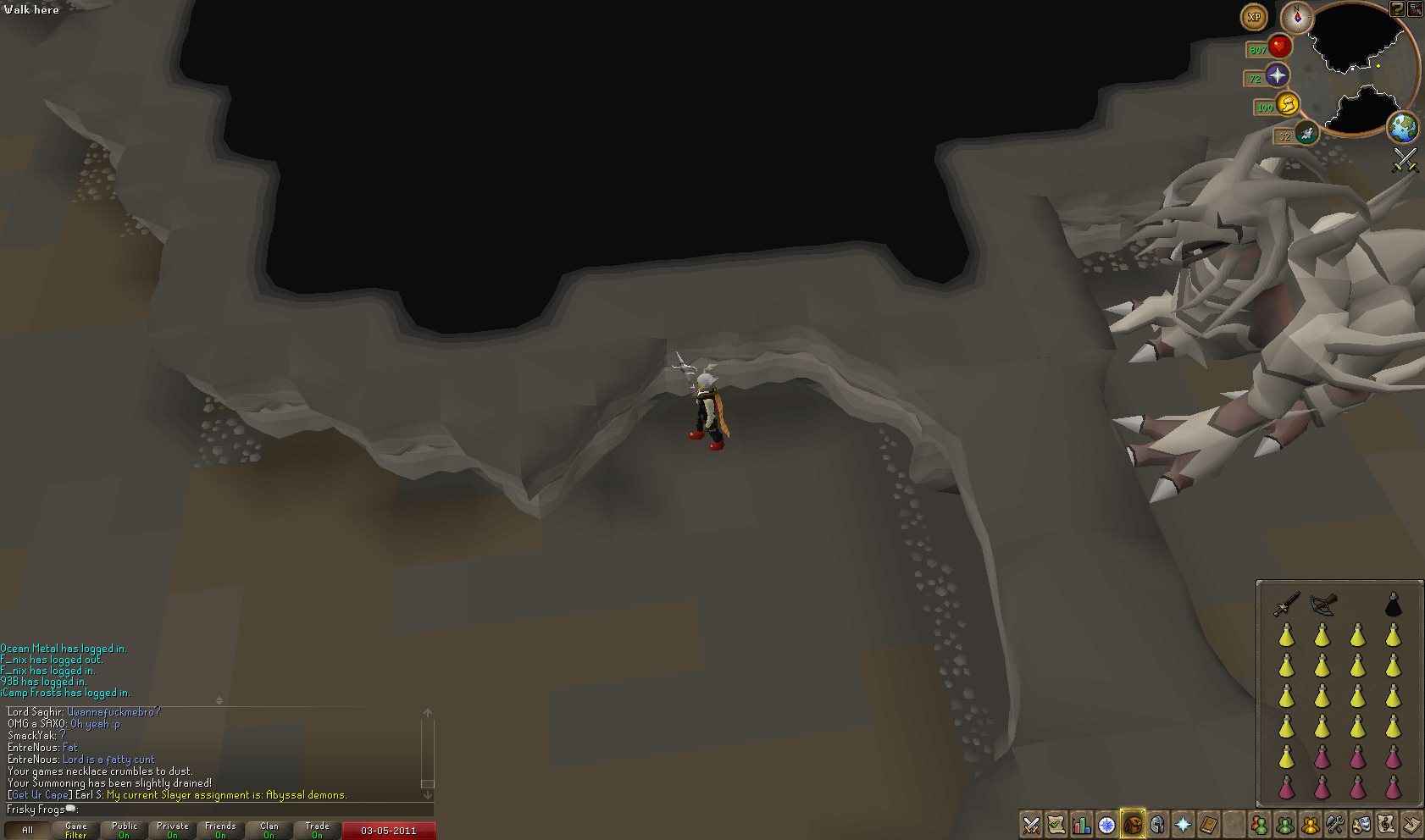 The corp beast has various nasty attacks at its disposal. These attacks will use all three combat types, but it is best to use mage prayer.

The first time you enter the corps lair a lure is needed to allow everyone to enter safely without dying or being attacked.

You lure the beast by one person stepping into the lair with mage pray on, then quickly stepping out again.

How To Lure The Corp Beast

As a whole fighting the corp beast is fairly straight forward. KEEP MAGE PRAYER ON. If it turns to attack you, run back to entrance and click to exit, then count to 5,
this normally gives enough time for the corp to swap targets, and renter.
Once the core spawns, make sure to step away from it or it will hit damage very fast, this also heals the corp. SO MAKE SURE TO STEP AWAY IF IT LANDS IN A SQUARE TOUCHING THE ONE YOUR STOOD IN.

Your job as a melee’r is to stab Corporal Beast. Upon entering Corp’s Lair you will need to use your special attacks with either of the 3 melee weapons listed above, if your specials hit, they will effectively lower Corp’s Defense making the kills quicker.

When the Core appears, alert the ranger as to where it is, if the core is under you and a ranger stuns it, please step 1 space away and do not move. Not moving will stop the core from bouncing around to other players. Whilst standing near the Core it will drain 100 HP every few seconds, if the core is stunned it only drains 100 HP every 1 minute which is acceptable.

Again this is really straight forward. KEEP MAGE PRAYER ON. If it attacks you leave the lair back through the entrance. The difference with ranging is that you need to stun the core.
If you attack the core with emerald e bolts, and it hits, you will stun the core, you then need to step next to it to stop the core from moving.
Whilst the core is stunned it will hit one damage occasionally rather than the constant hits it normally dishes out.
Use ruby bolts (which the damage is capped at 1000 damage unfortunately) until its low, then swap to diamond.

If you are ranging, killing Corp is simple, Stand far enough away from Corp so he cannot melee you, use Ruby (e)’s whilst he is above half HP, as these hit 1000 HP often enough they are crucial! After half HP Switch to your Diamond (e). When the core appears (Small creature that jumps from player to player stealing life points to feed Corp) You need to switch to Emerald (e) and attack the Core. Once you see green smoke appearing from the Core, it will be stunned, Instruct another player to stand 1 space away from the Core if it is still next to Corp, or move 1 space away from Core if it has landed underneath you.

(Standing next to core will drain 100 HP every few seconds, once it is stunned you will lose 100 HP every minute which is considerably less) Moving away from the core after it is stunned will cause it to regain consciousness and start moving around again. 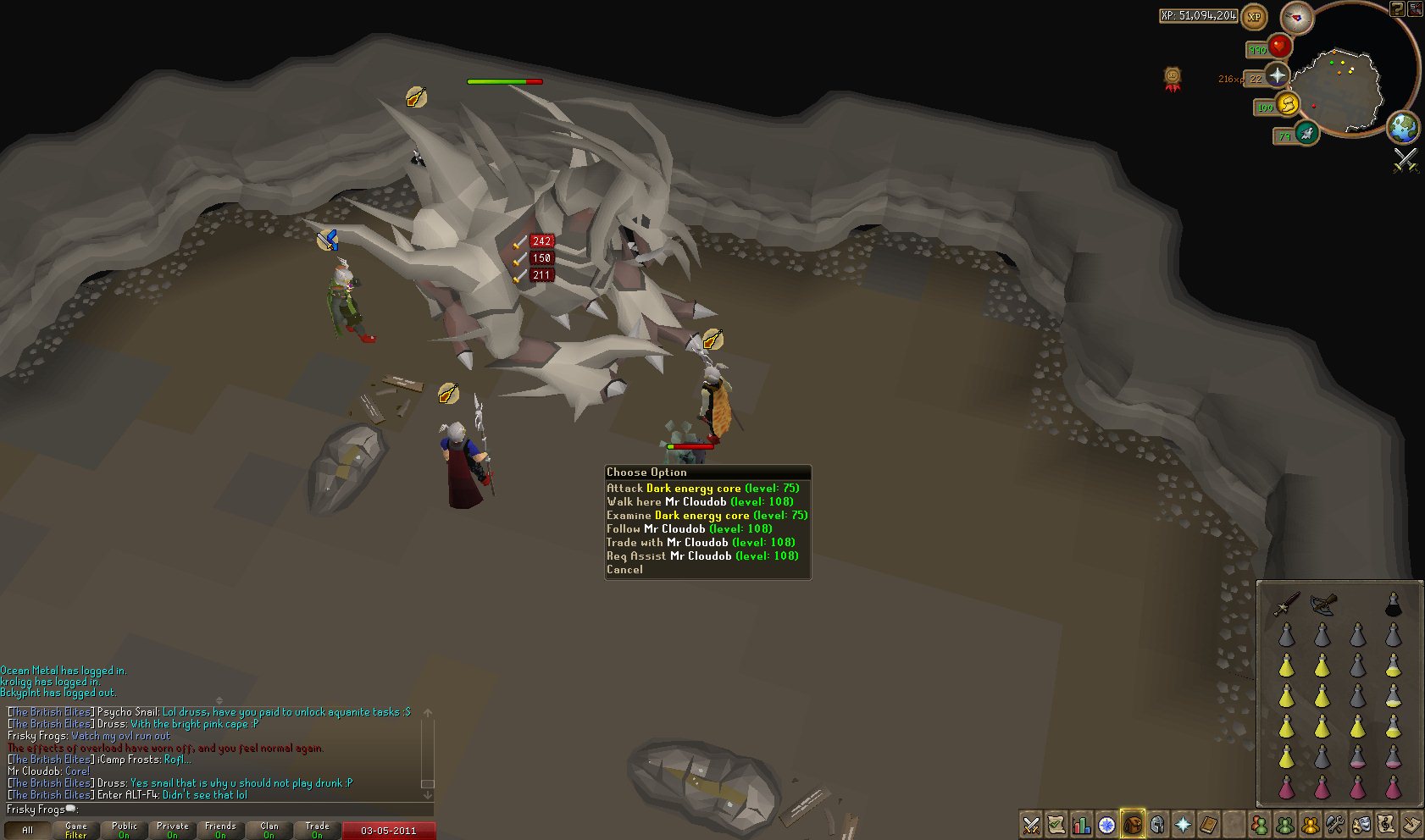 If you use up all your food, dont despair, thats why you carry a games necklace, teleport to the wilderness volcano, then run back up.
After the initial Luring kill, you will either need to leave the Lair and re-lure Corp, or you can form a circle/box around it’s spawn point. As shown in the photo below: 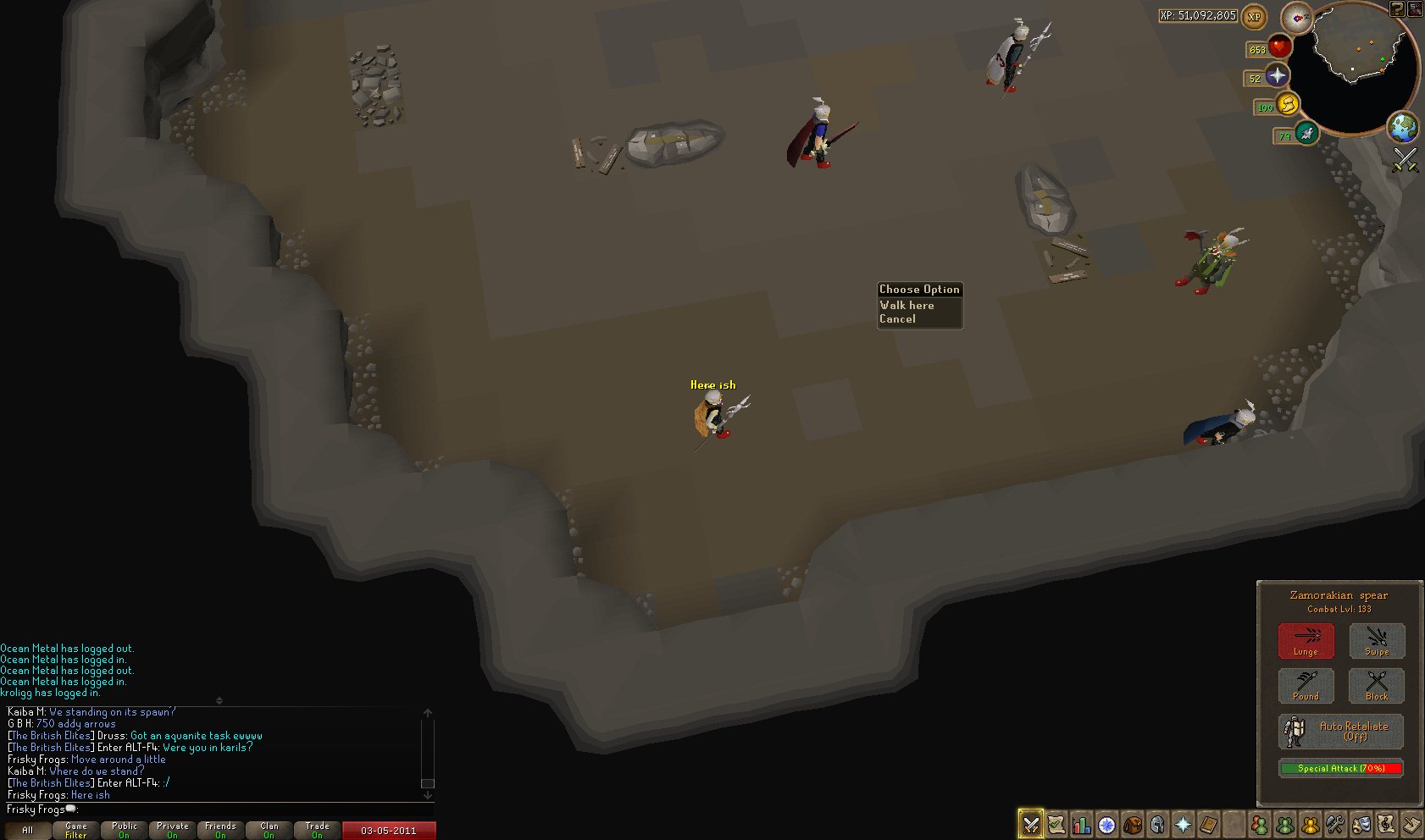 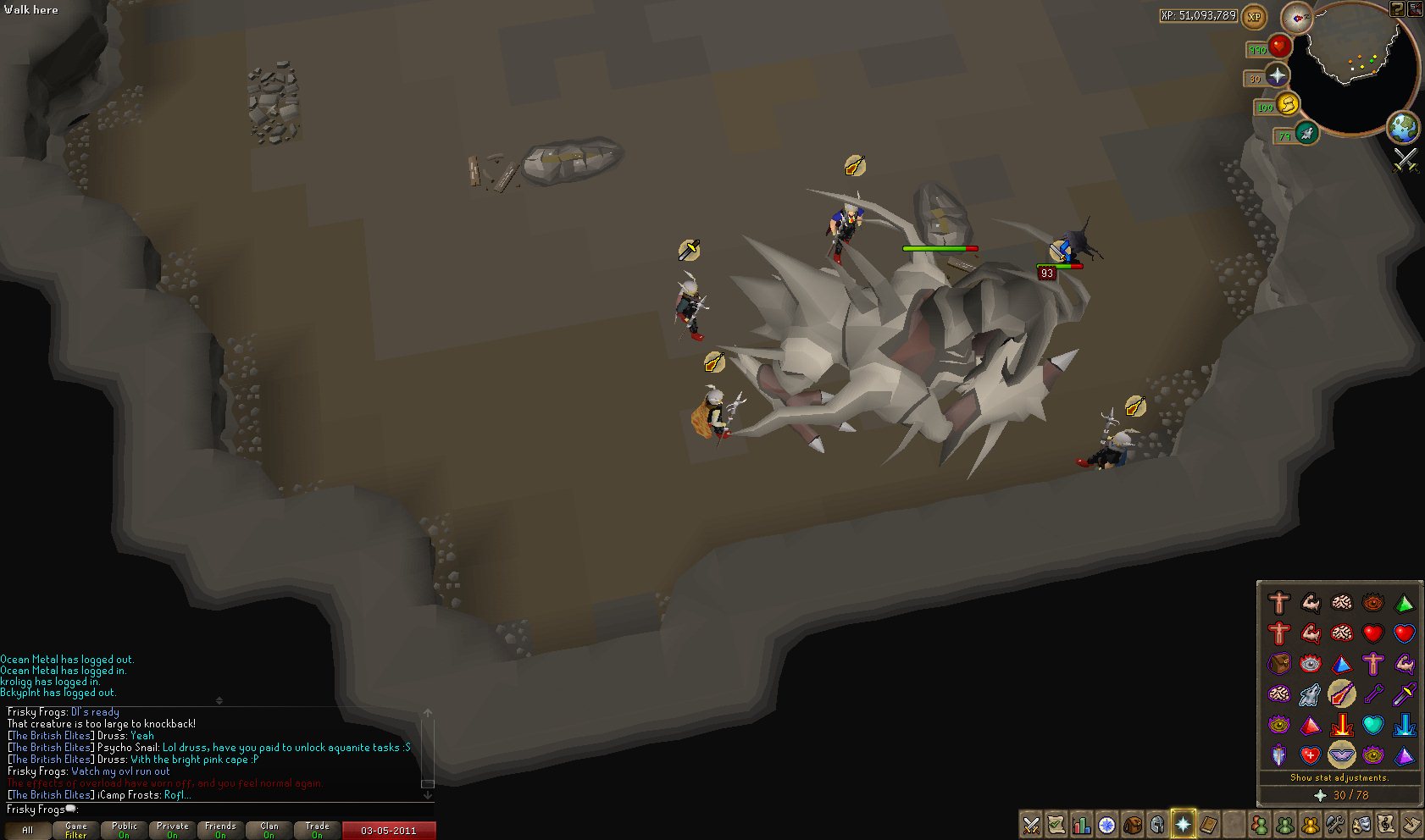 However depending on how many people there are, for example if there where less than say 8, it can be better to lure it.