Stuck in a cycling base layer?

We have all done it, you get home from a ride, go to get changed/shower and find you can’t get the cycling base layer off as its covered in sweat! Do you wait until it dries then try again? Do you just rip it and buy a new one? No! The trick is to roll up the bottom part as high as you can to the arm pits then pull it over your head. You should be able to use you arm to grab the back of the remainder and pull it off. It can be tricky and feel a bit claustrophobic but don’t panic and you will get there eventually!

The best thing you can do to upgrade or improve any bike is the tyres, this will make the biggest difference to your cycle, making it an easier and faster ride.

Tyres
I see a lot of people cycling around with tyres not at the right pressure, I also used to do this as a kid and its only now I can see the error of my ways. Put some air in your tyres and not only that, put the right pressure in. Most tyres will give you a PSI range on the side: 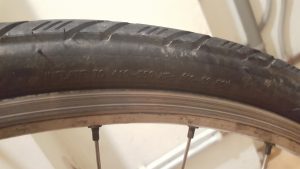 In the example it shows a range of 60-80 PSI, I normally go for the higher end of the range, you can really feel the difference!

If you are cycling on the road then you need less grip and thinner tyres in general. If you are offroad then more grip and thicker tyres is normally the answer. People who have a hybrid bike or do a bit of both then there are many tyres that fit inbetween to give you the best experience. You can purchase tyres from sites like wiggle or sometimes the best bet if your not quite sure is to go to your local bike shop, tell them what you are using it for and your budget then they will recommend something that works.

Wheels
Next we have the wheels, they consists of a hub in the middle, some spokes and a rim a similar size to your tyre. When I first purchased my hybrid bike the wheels were reasonably cheap and I had a lot of problems with them going wonky. Normally this is because some of the spokes have gone a bit loose. The spokes all need to be at the same tension and a spoke key can be used to tighten or loosen spokes but this is very fiddly balancing them to the right tension. I found it was worth spending a bit of money on a decent set of wheels to keep you on the straight and narrow.

I was given one of these bikes many years ago for christmas (1997), it has served me well over the years and I was shocked to see that the internet is pretty empty when it comes to providing information on this fine machine. I am going to dedicate this page to compiling facts and specs from the original design. I have also collected some pictures in the gallery at the end of the page. The 1998 version was blue/yellow with Magura hydraulic rim brakes and RST front dampers. The 1999 version was red/black with diatech disc brakes and Suntour front forks.

Edit: Due to popularity of this post I have also added the Box Two, Box Three and Box Shock specs and images, please do let me know via the comments if you have additional information or spot any errors.

Firstly it was sold in the standard frame sizes Giant full suspension bikes are sold in these days.
-Size
-Measurement
-Approx height range

Made from alloy, none of this aluminium/carbon malarkey you get now days 😛
6061 T6 Aluminium

Unfortunately there was a common design fault with the Giant Box One. It would generally last one or two years then the frame would crack. My personal Giant Box One had this problem and I have seen many more examples with the same issue. Once this happens it is a write off.