A nice distraction for fishing experience….

This is a safe minigame.
No items required.

To begin this game you need to find a fisherman

The Fisherman
After speaking to a fisherman he will give you 10 competition tickets which you can use per week.

Best practice to use a skills necklace to teleport to the fishing guild. Until you win your first tackle box which will give you the time of the next game you can ask the fisherman’s wife when the next competition will take place. The fisherman will not be around until 5 minutes before the competition starts (hes probably down the pub or something). 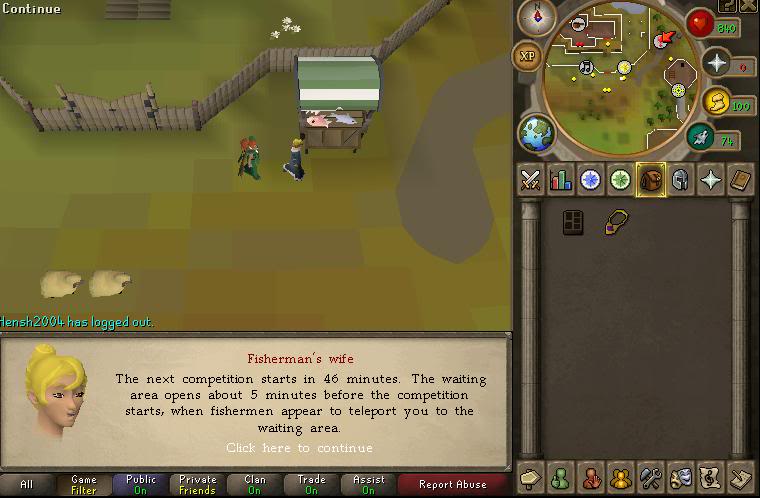 Fishfling Guide – Time to Next Game

When he appears before you let him teleport you to Isla Anglerine ask him for any tips he has got about the fish. They are pretty general but are of this ilk: 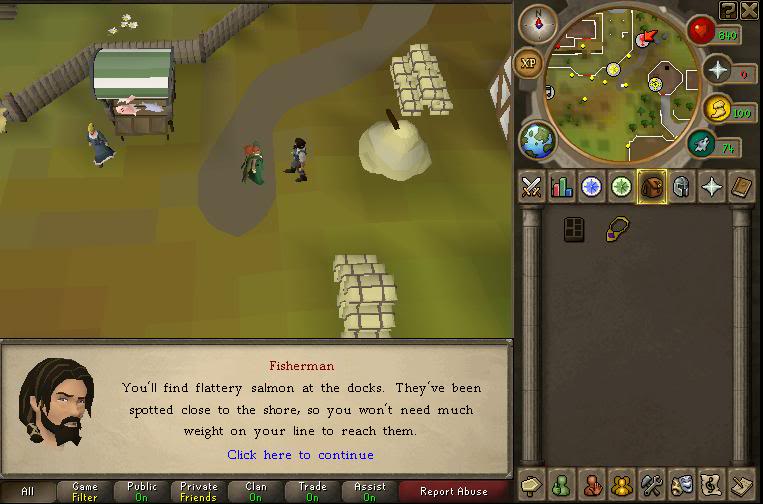 Frankly I can’t be arsed with the clues, there’s enough time to work it out without them I managed to cut and paste all the screenshots in the same time but why not – use them if you want.

The Lobby
So here you are in the lobby. 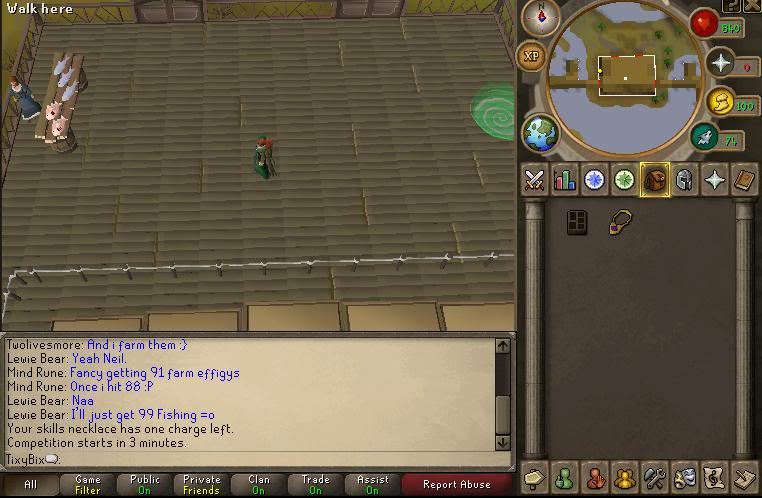 The time spent here is normally used if other players show up to decide whether you want to work as a team or go solo. The indication that the game is about to start is when the word loading appears in the left hand top of the screen – to get ahead of the competition click when you see that coming. The game does count you down by the minute but those extra precious seconds are useful!

There are two main strategies to getting points in this game – finding the six 100% combinations of fishing tackle and getting the heaviest fishing haul that you can in 15 minutes. People who are going for exp only will just find the heaviest fish and not move around but may try and steal your combinations to maximise at the last minute. Don’t be bothering yourself with this nubberlight.

There are two medals up for grabs every round, one for 3 combinations and two for the 6. This guide will show you how to find the six and fish like your life depends on it maximising exp and medals so that you can get the fishing tacklebox reward (which isn’t brilliant tbh but you have to collect them all eh Jeppy?)

The Game
There are four areas – the docks, the river, the lake and the beach. You can do them in any order with six fish to find – so two areas house two fish. This is totally random.

I always start at the docks to the east. As near as I can to the beginning of the jetty and immediately hook up this combination: worms, standard and one small weight. Lucky me I got 33% straight away – I must have got something right – the question will be what? 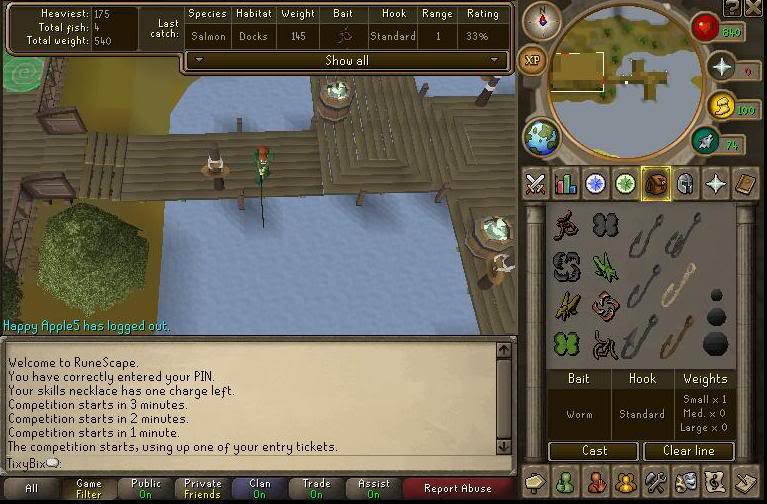 Fishfling Guide – Starting At The Docks

There is a system to this and it is infallible. We have to get 100% combination. It is sheer luck if you get near it on first hit. 33% for hook, 33% for the bait and 33% for the weight. Yes I know that adds up to 99% but stop being so flipping pedantic.

I always start with the hook – this is easiest. There are six hooks and they are in pairs. Standard and Slim, Large and Double and Bone and Hook. You need to be watching this line very carefully at this point. Watch that percentage its’ going to do one of three things, go up, go down or stay the same. If it goes up you are on a winner and you could switch for other in pairing to see if it goes up again, if it goes down then the last one you had was better go back to it and if it stays the same then you need to move to the last set of three. By power of deduction, you should find the optimum hook. 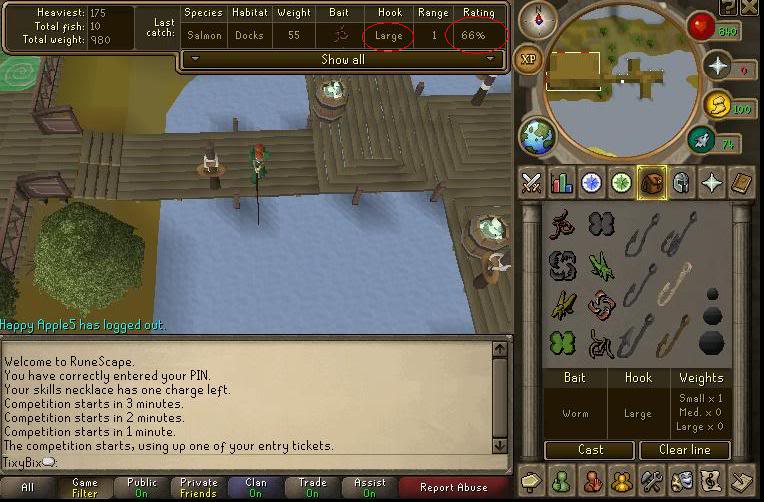 Now we need to move on to the weight. The percentage is going to be at LEAST 33% if not more after the hook – watch that percentage figure as you try the weights. That first small weight is range 1. This is the basic table of how you get the various weights:

Look I didn’t make this game – heaven knows whey 1 small and 4 large don’t make 5 but who are we to question eh?

This is the strict order that you place the weights on your rod. You need to click and wait for the change to happen. I think it’s safe to say that if you have only 1 small weight on and it’s only at 33% you can probably jump a couple of weights. You are looking to increase your hook percentage by a further 33%. When you find the right weight we are on to the last step, which is the bait.

The bait which although has 8 options are categorised by shape and colour. If you are closing in on the 100% only move one step away to the bait you are using – red worm to maggots (brown worm) or to shrimp – (red) if you are way off then you will need to jump to two away at least to save time so if you are red worm go the distance to brown cricket or the other way to crayfish.

Watch the fish that you are catching as you are switching as this is when you ideally need to find the double fish in an area. Note the change in fish and why it changed but refocus on the fish you are doing. When you have got that one open up the table and put the settings to the other fish to start finding that one. 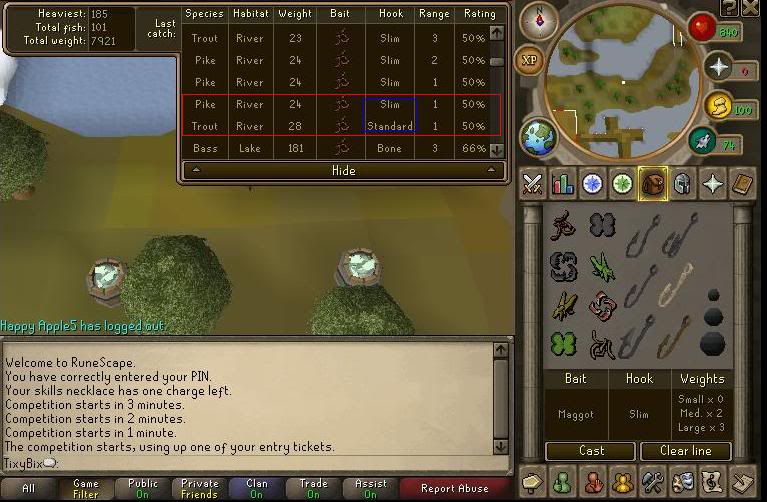 The heaviest fish is 199 – this fish will always have a 9 at the end of its number. In this game it was the herring. If I have found this fish I normally catch a few while I am there in hope of snagging the 199 as this helps your exp. If I don’t catch it within about 6 fish I move on and come back at the end. If you want weight over medals just keep fishing at the 199 to try and get the heaviest haul you can.

At the end of the 15 minutes you are teleported to the lobby – if you are in the first five you get to stand on the podium – if you get first place you can stand there making winning style emotes but you will find yourself on your own pretty quick as people tend to jump off and fly out of the portal. 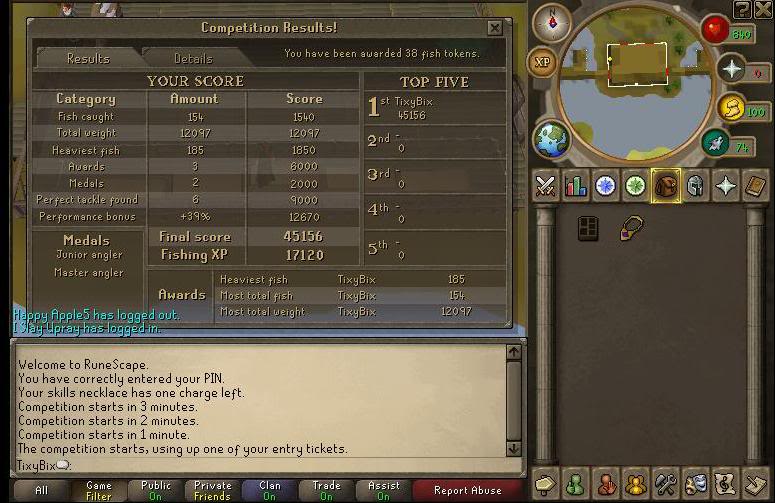 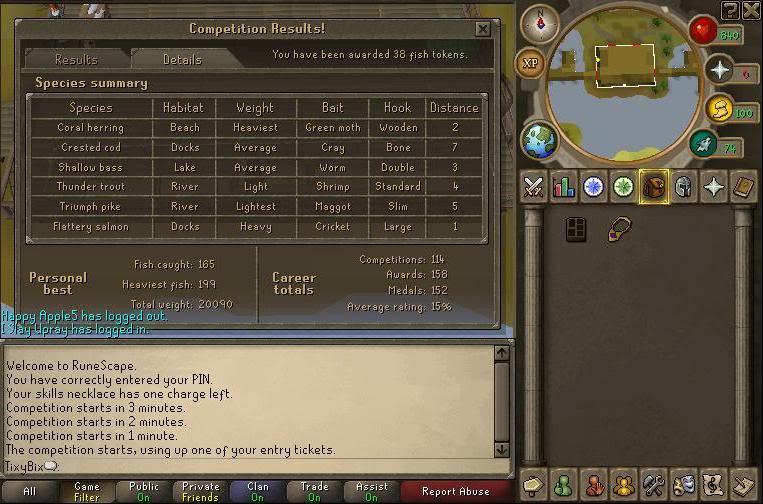 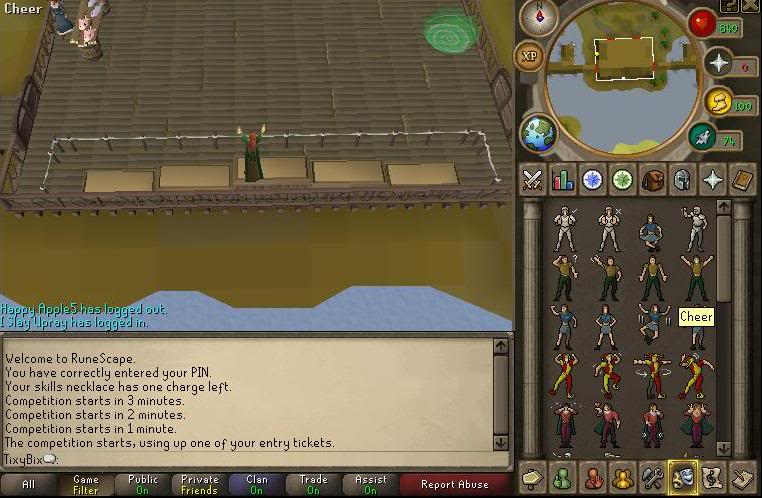 Your Score
Your competition details will come up at the end of the game and here comes the boring numbers bit. You will be judged on the following:

1. Total fish caught x 10
2. Heaviest fish x 10
3. Number of awards x 2000 (obviously playing on your own helps!)
4. Number of medals x 1000 (less than six is really irritating but there was a glitch at one point where the salmon didn’t show up if in same area as pike think this is fixed)
5. Perfect Tackle Found x 1500 (not really sure how they get this number could be randomly generated for all I know)
6. Bonus for Performance – I got 39% and challenge Jagex to tell me why.

The overall score is 1 – 5 added together and multiplied with 6. There is a cap of 40k of points with them maximum experience points given of reportedly 20k – I tend to get 17k unless the kids are driving me nuts or a Tesco delivery shows up

The Missing Medals
Yes TixyBix, but what about those two other medals you can get you are thinking. Well I say, I have never got them because I am a combination hunter but there are two others for grabs

Junior Angler -three 100% combinations
Master Angler – six 100% combinations
Heavy Catch -80% of fish caught being of the heaviest species (remember nubberlight up there?)
Efficient Fisher -average of 80% catch rating for each species you caught

Fishing Tokens
For every four fish you caught you will get a fishing token these can be used to trade in with the fisherman’s wife for either fish or a tackle box which take a combination of medals and tokens to get.

These can be replaced free of charge should you be marauding round the wilderness with it looking for penguins from the fisherman’s wife ( she probably could use the company) and they have slots for fishing tools and bait starting with one of each. The first boxes ability to tell you the time of competitions is a far greater reward although the fisherman’s wife won’t see you so often…

The last box gives you five fishing tools slots 3 bait slots which can hold 1000 bait and two slots for gloves.

This will give you more bank space but I think its safe to say that it is not applauded as one of the greater rewards in the world of Runescape.

There is probably more to add to make this guide the most informative but you weren’t planning on going on mastermind as a specialised topic were you? The main thing is this – its fun, it gives me about 68k an hour fishing exp and 170k fishing exp a week with my ten tokens in 2 and a half hours and is a welcome break from flogging the monk fish to death.